Alison M. Vogel, Tryston A. Beyrer, and Frederick E. Below

Can the continuous corn yield penalty be mitigated with residue and agronomic management?

Accelerated residue degradation and nutrient cycling will be necessary to maximize yield potential in corn (Zea mays L.) grown continuously, in addition to other high volume residue situations such as increased planting density and crops that annually produce much greater than average yields.
• Residue accumulation, along with soil nitrogen availability or immobilization, and the weather are the primary agents of the
continuous corn yield penalty (CCYP).
• Potential candidates to increase corn yields and reduce the causative factors of the CCYP are mechanical residue management and enhanced agronomic systems. 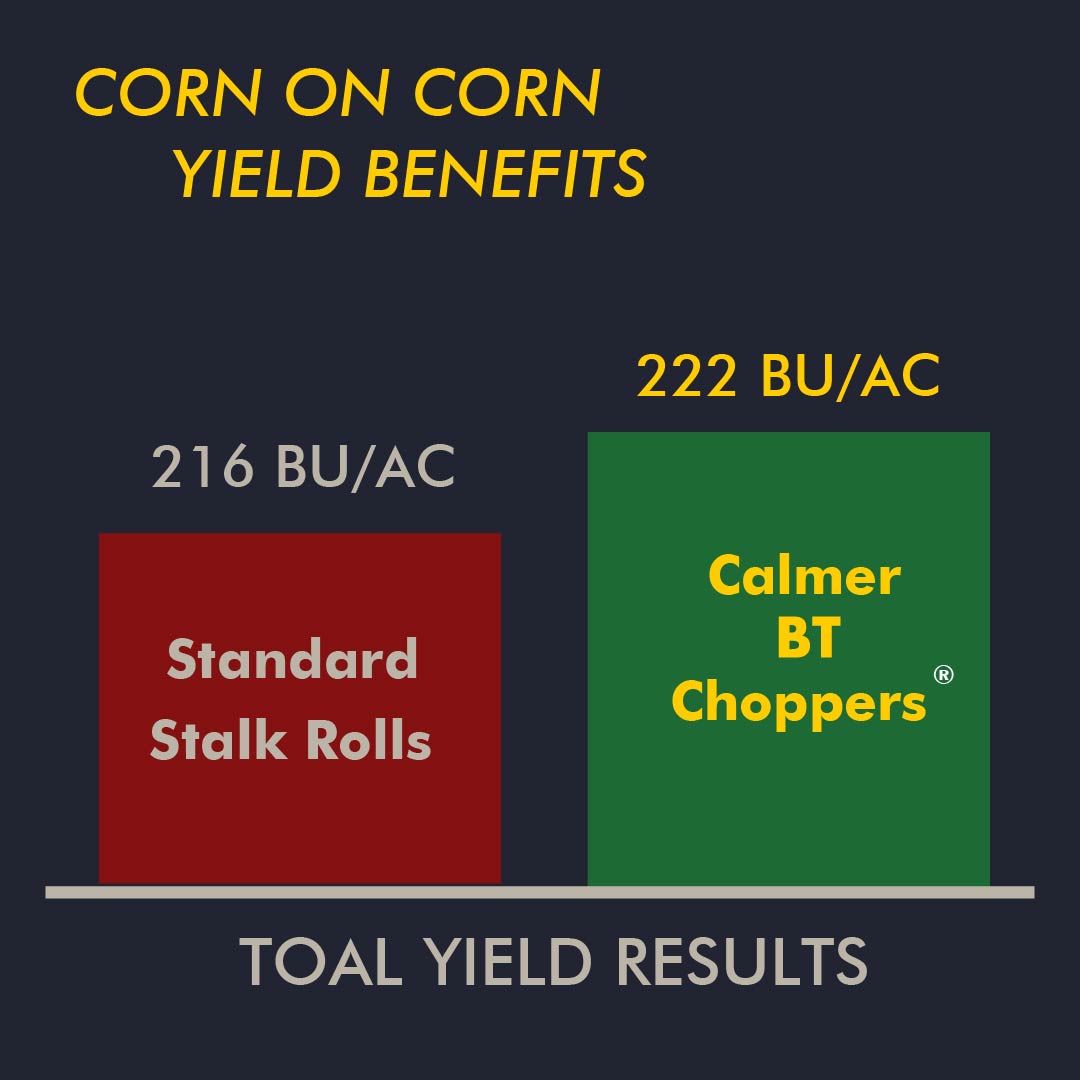 The field experiment was conducted at Champaign, Illinois on a Drummer Flanagan silty clay loam, planted on April 28th, 2016 over 4 replicated blocks of 13th year continuous corn and 1st year corn in a corn-soybean rotation (Figure 1A and 1B) using two commercial hybrids.  The factors evaluated were:

Mechanical residue treatments were implemented during the
previous harvest by a combine head equipped with: 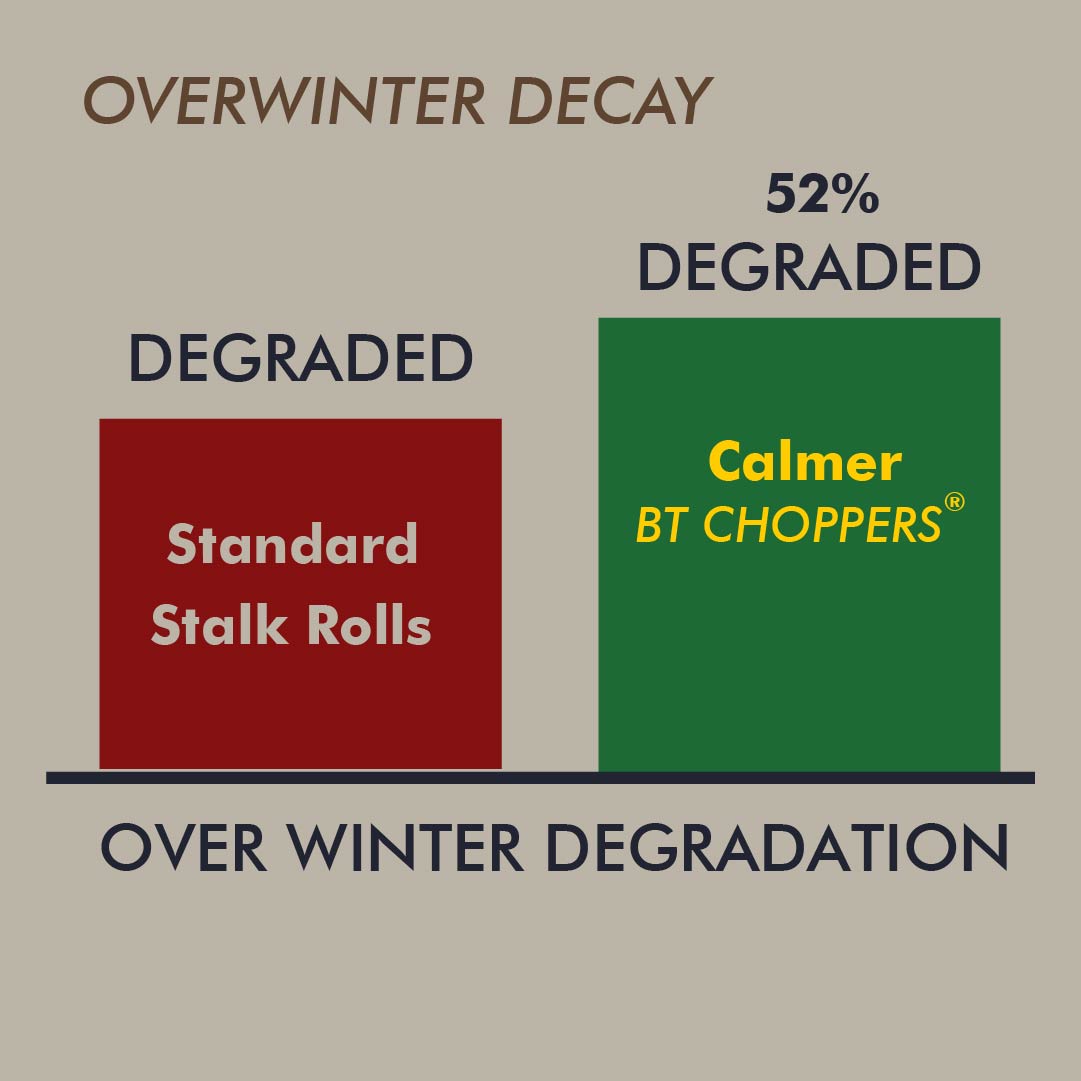 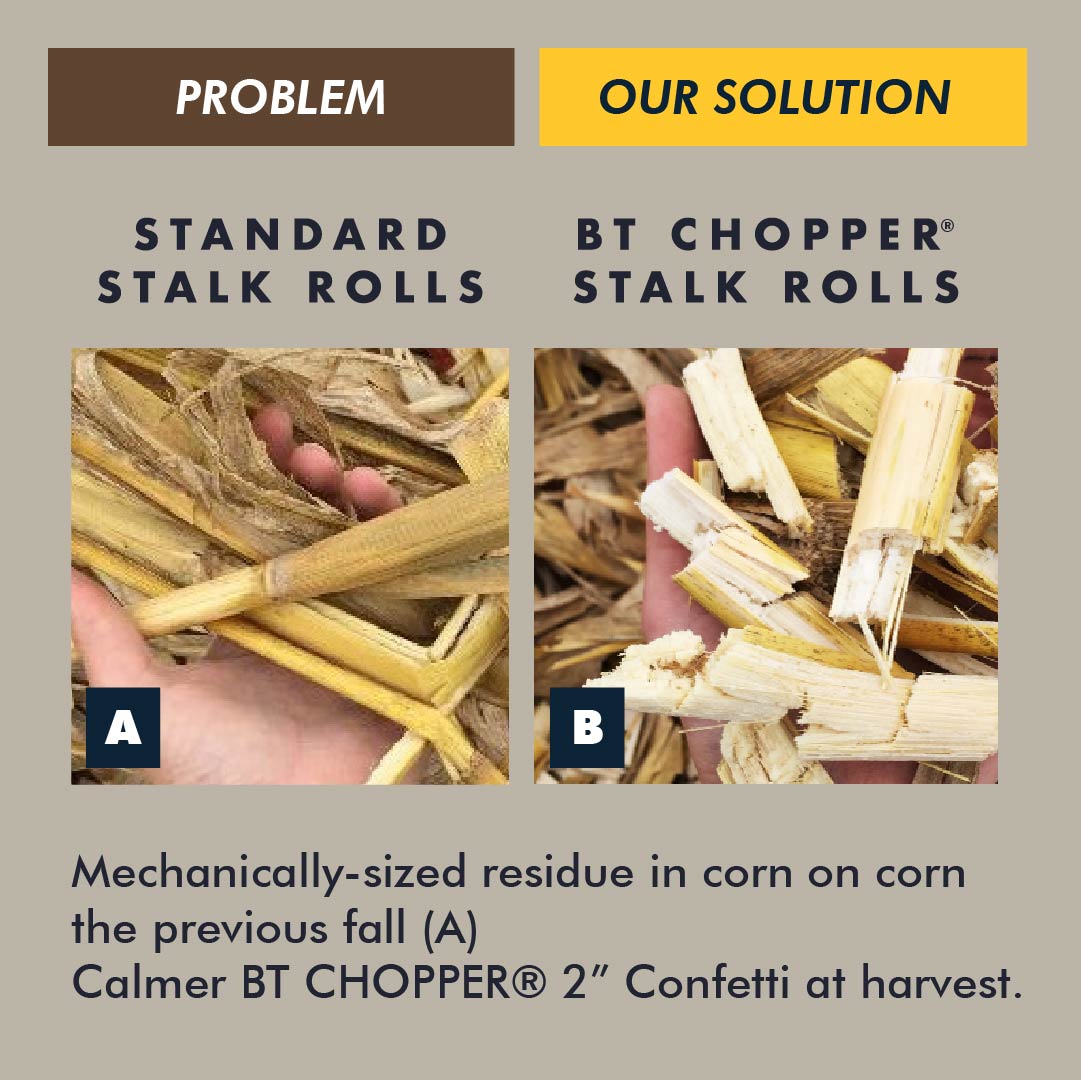 Mechanical residue management showed visual differences after harvest (Figure 2A and 2B), and in-season (Figure 2C and 2D).
• On average, residue decay was increased by sizing the residue (50% reduction in residue when chopped compared to a 43% reduction with
the standard stalk rollers) (Figure 3).
• Seedling emergence in continuous corn was significantly delayed during the first 5 days of emergence (3-26% delay across harvest method; P = 0.007) compared to corn in rotation with soybean. Stand establishment was reduced in corn on corn vs. corn following soybean (94% vs. 97%, respectively) (Figure 4).
• Visual growth differences between continuous corn and rotated corn (Figure 1A, and 1B), translated into a CCYP of 0.6 Mg ha
-1 across treatments (Table 1); the greatest yields were achieved in the corn/soybean rotation with the enhanced agronomic system (i.e., additional
plants, added fertility, side dressed nitrogen, and a foliar fungicide application).
• The high input level improved plant growth (Figure 5) and grain yield across rotations by 2.1 Mg ha -1 (Table 1; P = < 0.001). Across harvest method, the CCYP was lessened by 56% with the high input level (penalty of 0.4 Mg ha -1 ) vs. the standard input level (penalty of 0.7 Mg ha -1 ), suggesting enhanced agronomic management as a method to alleviate the CCYP.

Figure 2. Mechanical residue management in corn on corn the previous fall (A and B) and at the R3 growth stage the following growing season (C and D): Standard stalk rollers (A and C) and Calmer’s BT choppers (B and D) .

Figure 1. Late-season differences between 13th year continuously grown
corn (A) and 1 st year corn in a corn-soybean rotation (B). | A B | A B C D 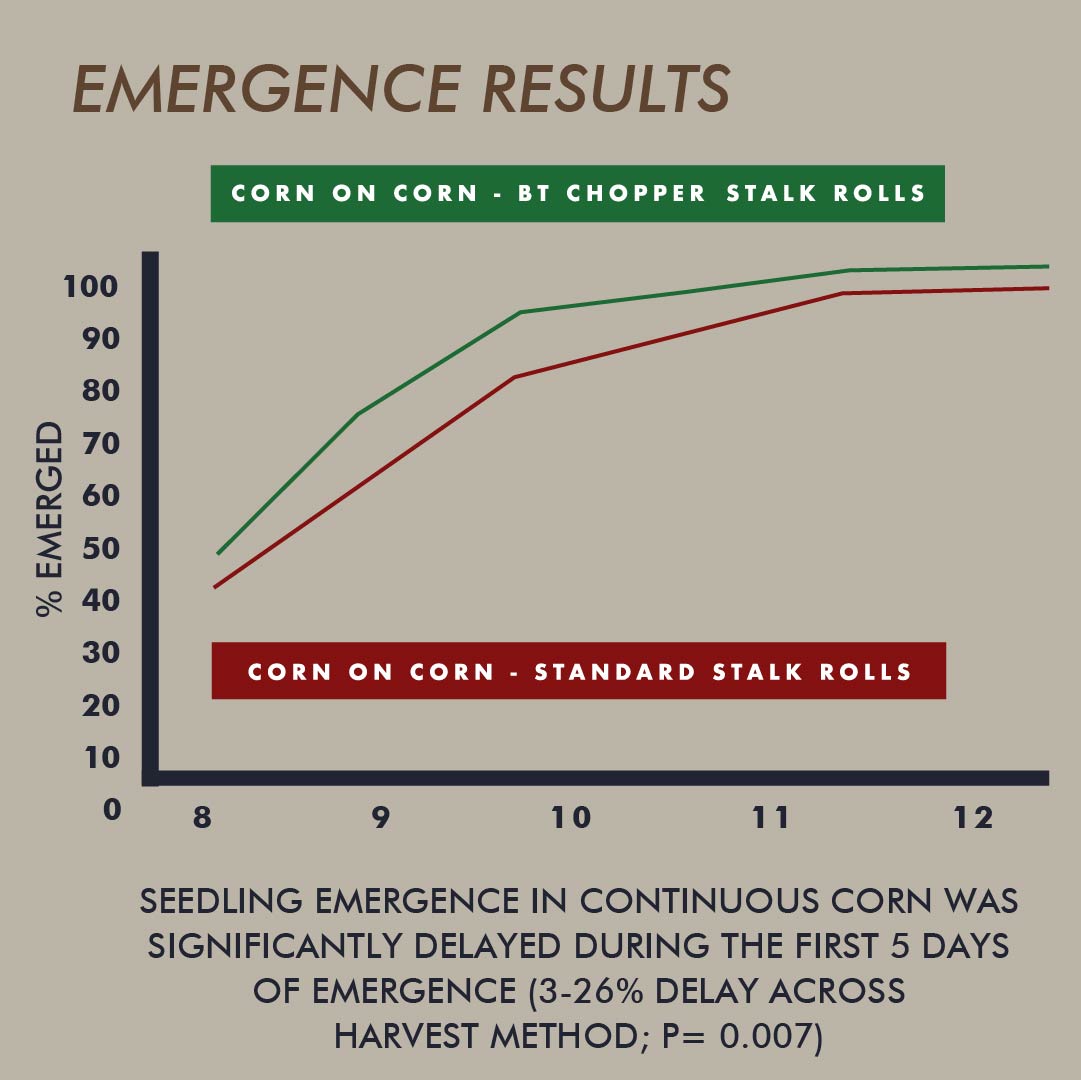 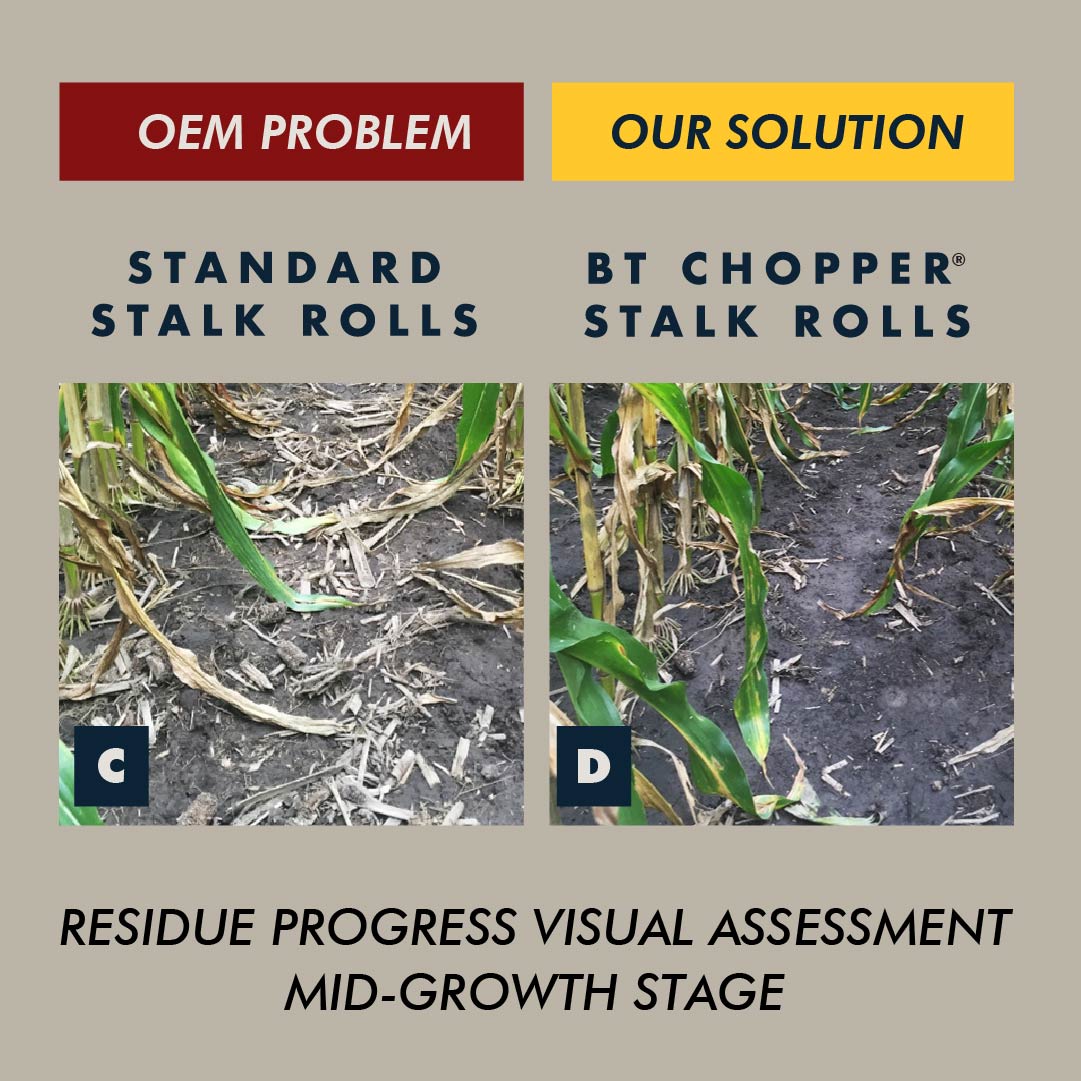 Does residue management reduce the CCYP?

Can a high input system mitigate the yield penalty associated with continuous corn?

Complete the ROI plan to see how

IT PAYS TO RUN CALMER PRODUCTS!