LARGEST CORN HEAD IN THE WORLD

As the inventor of the world’s first single chain, 15-inch corn head in 1995, Marion Calmer has been a trailblazer in the Ag industry when it comes to narrow row corn and the corn heads that harvest it.  As the President of Calmer’s Ag Research Center, the largest independently-funded, farmer-run Ag research center in the United States, Marion has conducted extensive research on various aspects pertaining to planting, growing and harvesting corn in narrow rows. Below is some helpful information for anyone interested in making the move to narrow row corn.

A Quote from Marion Calmer – Farmer, Researcher, and Inventor

“I have a passion for farming, and for improving the way I farm. I have farmed on my own since 1975, and I am always trying to become more profitable and environmentally friendly. I have found that narrow row corn is helping to achieve both goals. Bottom line: there is less soil erosion in the field, healthier plants, less weeds, better moisture and sunlight, and increased nutrient utilization. This ultimately results in higher yields, less chemicals, and more bottom line profit! I want everyone to learn the correct way to grow narrow row corn, and see that there really are significant and repeatable advantages! Please refer to the links below for detailed information on planting, growing, harvesting and researching narrow row crops or call me directly at (309) 368-1182.” 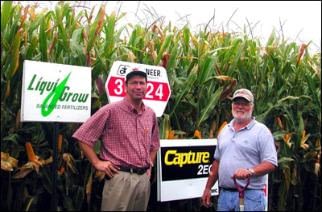 “All indications are that I should have
switched to 20″ rows sooner!”

In 15″ and 20″ rows, plant spacing become more uniform and as a result, reduces in-row competition between plants and improves sunlight interception.

Based on farmer conducted research and experience, proper implementation of 15-inch row spacings provides significantly higher yields than those of traditional 30-inch or greater row spacings.

Hear Marion discuss his progression toward solid seeded corn over the years and explain why he sees the industry continuing to move toward narrower rows in the future.

The move from 40- and 38-inch row corn down to 30-inch rows is credited as one of the major factors contributing to the steady increase of corn yields over the past several decades, along with improved hybrids, and better herbicides and fertilizers.

The next major breakthrough may be just over the horizon, if 15-inch “ultra-narrow row” corn fulfills its early promises of improved yields and weed control advantages, similar to the gains 15-inch soybeans have shown.

There’s a generally accepted rule of thumb among corn researchers that says you’ll average a 1-bushel-per-acre yield increase with every inch of row spacing you decrease. While quite a few studies have focused on 20-inch corn, researchers  involved with 15-inch corn see no reason to consider 20  inches as a self-imposed lower limit . 15-inch row corn, they say, offers the  best balance of yield potential, weed control and harvesting ease.  Marion Calmer is an Alpha, Illinois, farmer who operates his own 1,300 acre  independent research center based on “real world” field trials. He is an  enthusiastic proponent of ultra-narrow row.  “We have been doing extensive work with ultra-narrow row corn and believe  beyond the shadow of a doubt that 15-inch rows offer a yield advantage,”  says Calmer, who has grown 15-inch corn in field conditions for several  years.